So we have been offering micro soldering to repair many common issues on MacBook Pro logic boards for a while now and thought we’d update you with some common issues we have seen and how we have fixed them! We’ve now saved over 200 machines from the scrapyard or from a £600 apple board replacement. Maybe we can help you?

Liquid spills can damage machines in a variety of ways but one we have seen a number of is on MacBook Retina 2013-15 machines where the liquid has shorted the keyboard backlight socket on the motherboard shorting an important 5v rail to ground. As long as there is no damage elsewhere the port can be replaced or removed and it will bring the machine back to life. (ultrasonic cleaning etc is required after and thorough testing). This lets the Mac startup – unfortunately it does stop the keyboard back light from working; but much cheaper than a whole logic board replacement. 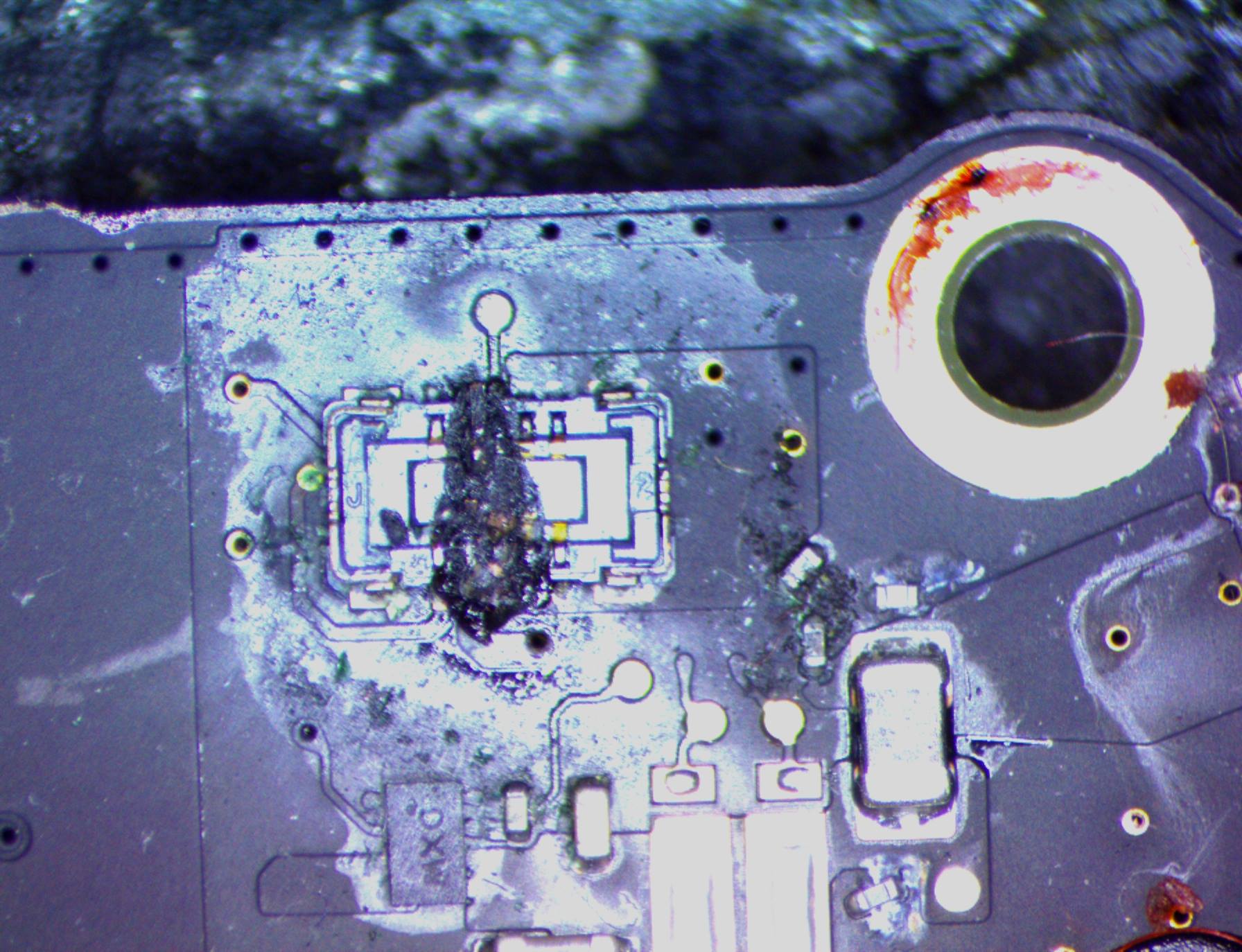 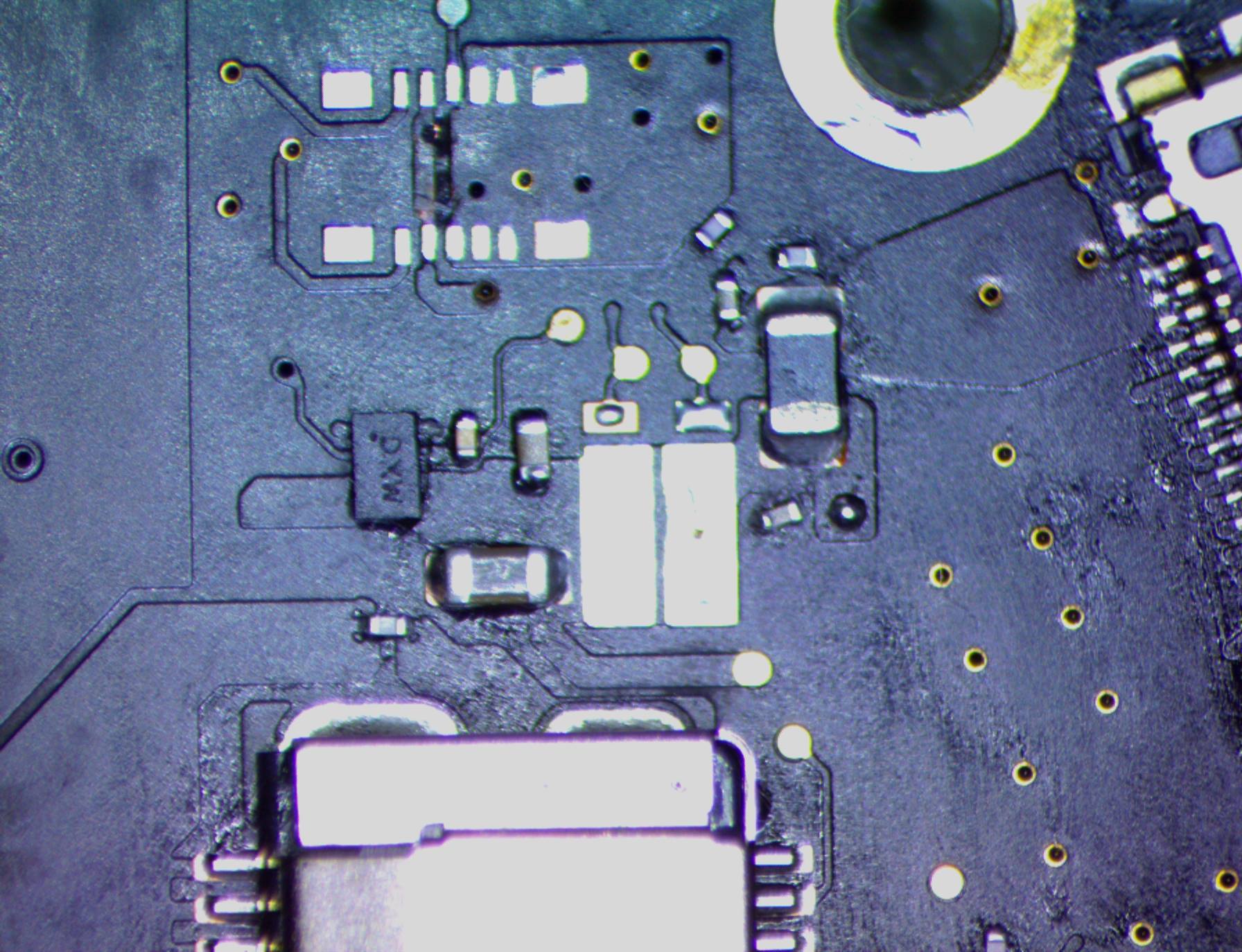 These machines were subject to a recall (same as the 2011′s) for GPU issues – however in a lot of cases it is in fact damaged soldered connections to the GPU power QFN package (U8900) we suspect due to its placement on the underside of the board underneath a heatsink screw hole which applies pressure to the board and damages the connection. This can be resolved by preheating the board and flowing the solder to the pins of the chip. Most common symptoms of this is the screen going black or not coming on at all. (This only applies to the L2012 and E2013 15″ retinas, we can resolve issues on other machines but they have a different layout and don’t suffer this issue). Kudos to Duke Fawks for the solution.

Another problem which is often attributed to the GPU shows up in the 2010 15″. Common symptoms are kernel panics, normally when starting to run a high GPU intensive program. The fault is in fact a bad tantalum capacitor on the board which is used when switching from integrated to dedicated graphics chips. The solution is to replace with a larger longer lasting poly capacitor this requires scraping a larger ground plane for the ground pin but it will last! (Another Duke Fawks first) 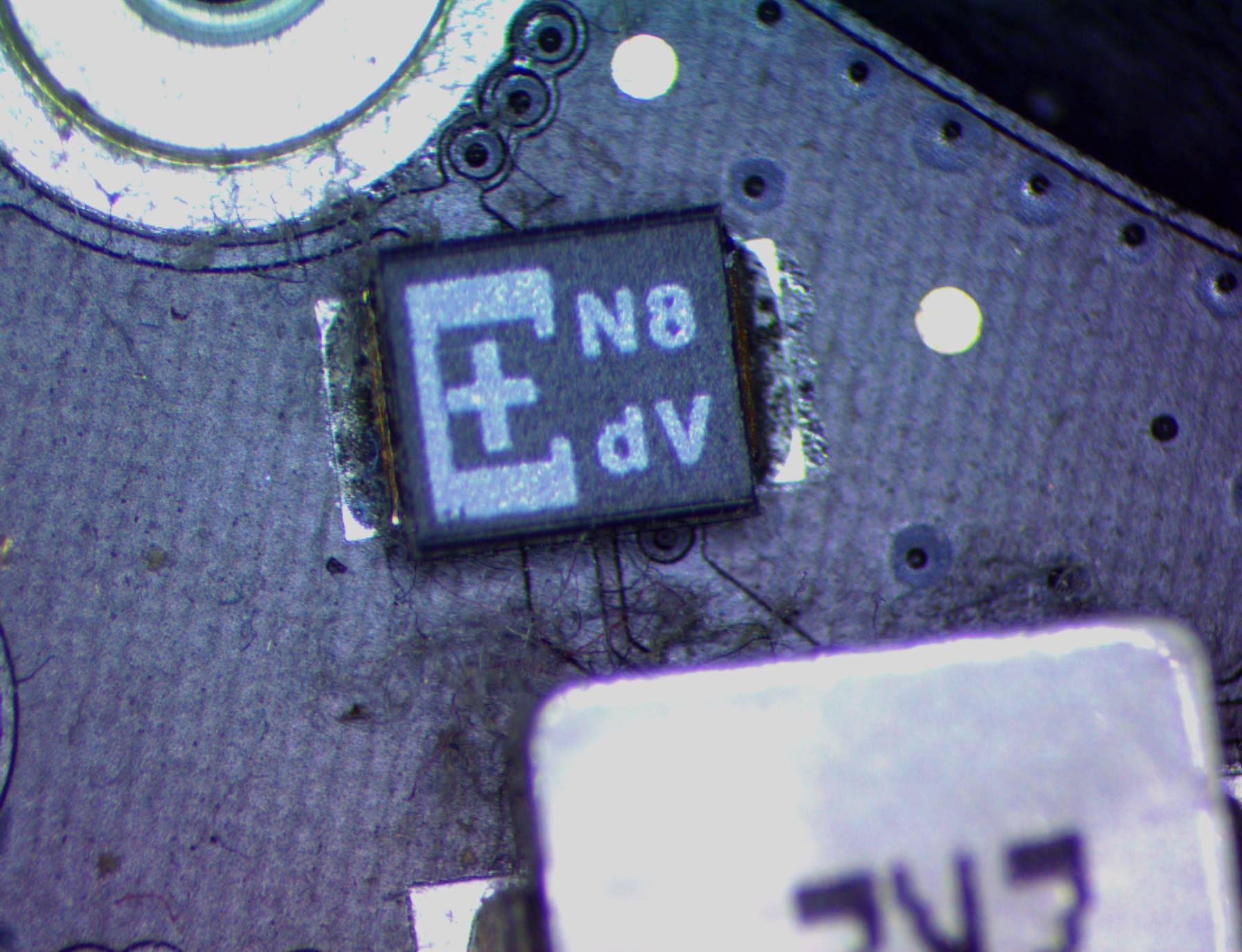 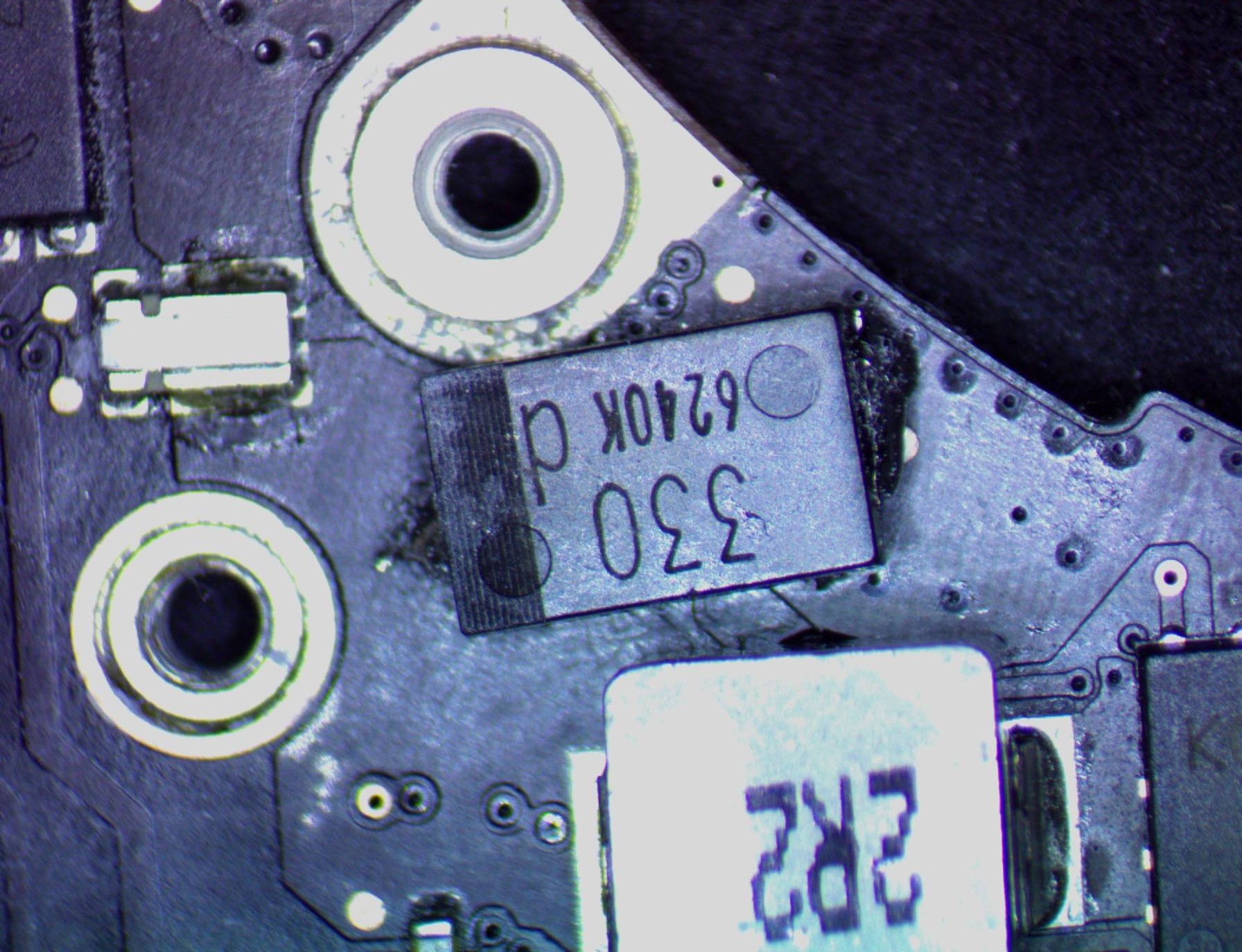 A common failing component when liquid has got onto MacBook Air’s is the U1950 chip. This is mostly used to send a all system power good signal through for the machine to turn to an S0 state (power on). Replace the chip with a known good one and make good the traces (often pin 8 is burned). 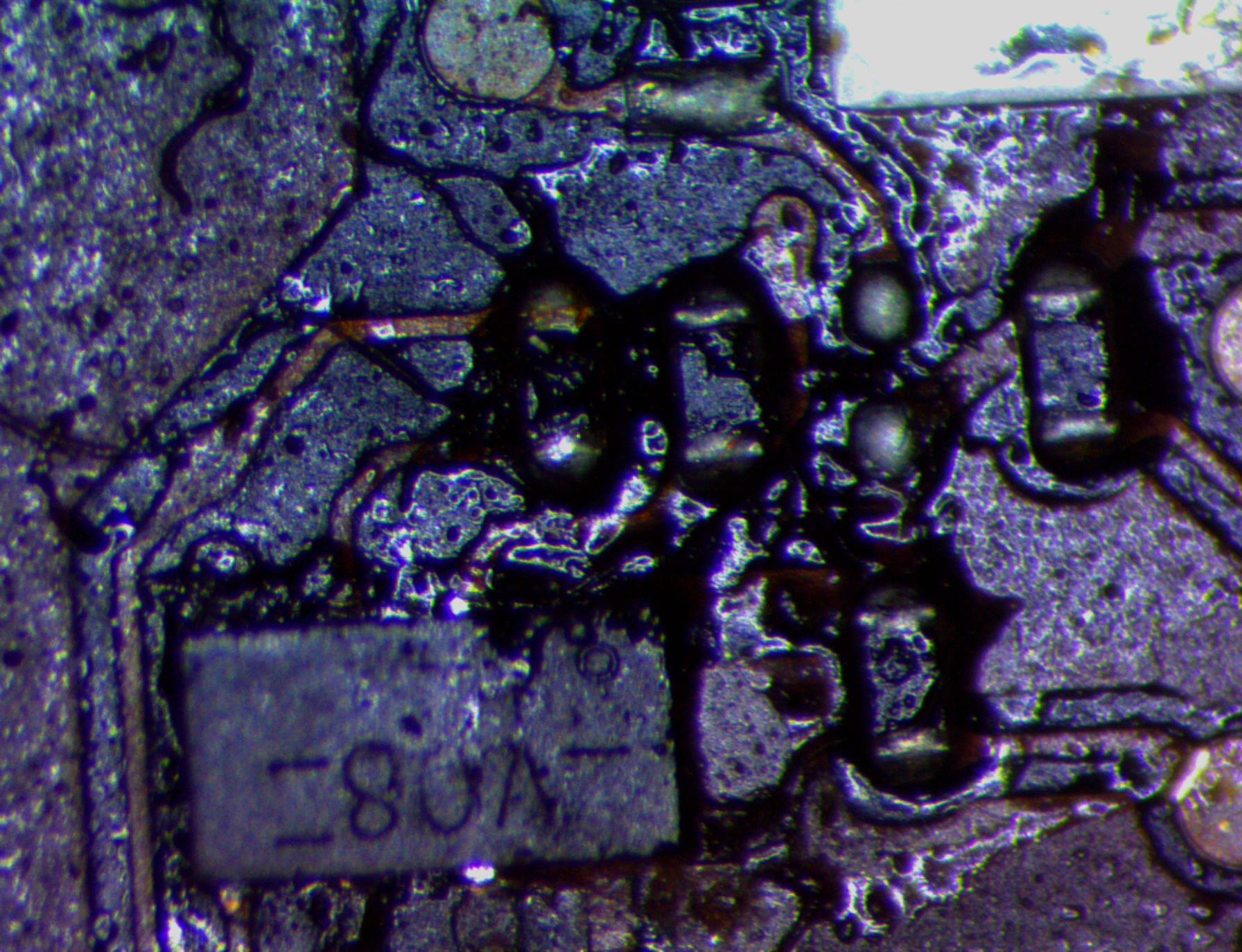 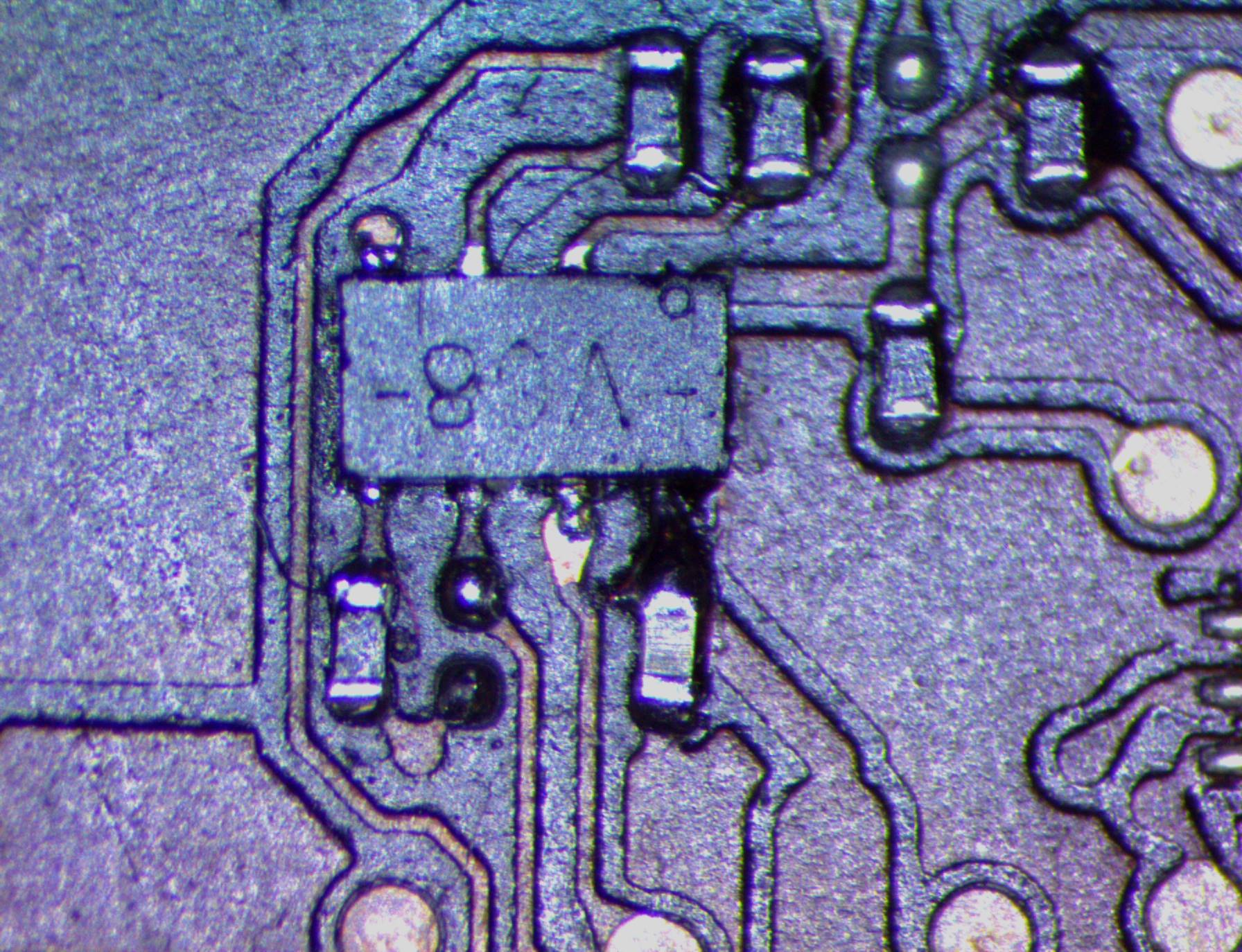 We see a lot of these where accidents have happened whilst doing a DIY upgrade or repair. In most cases these can be fixed easily. 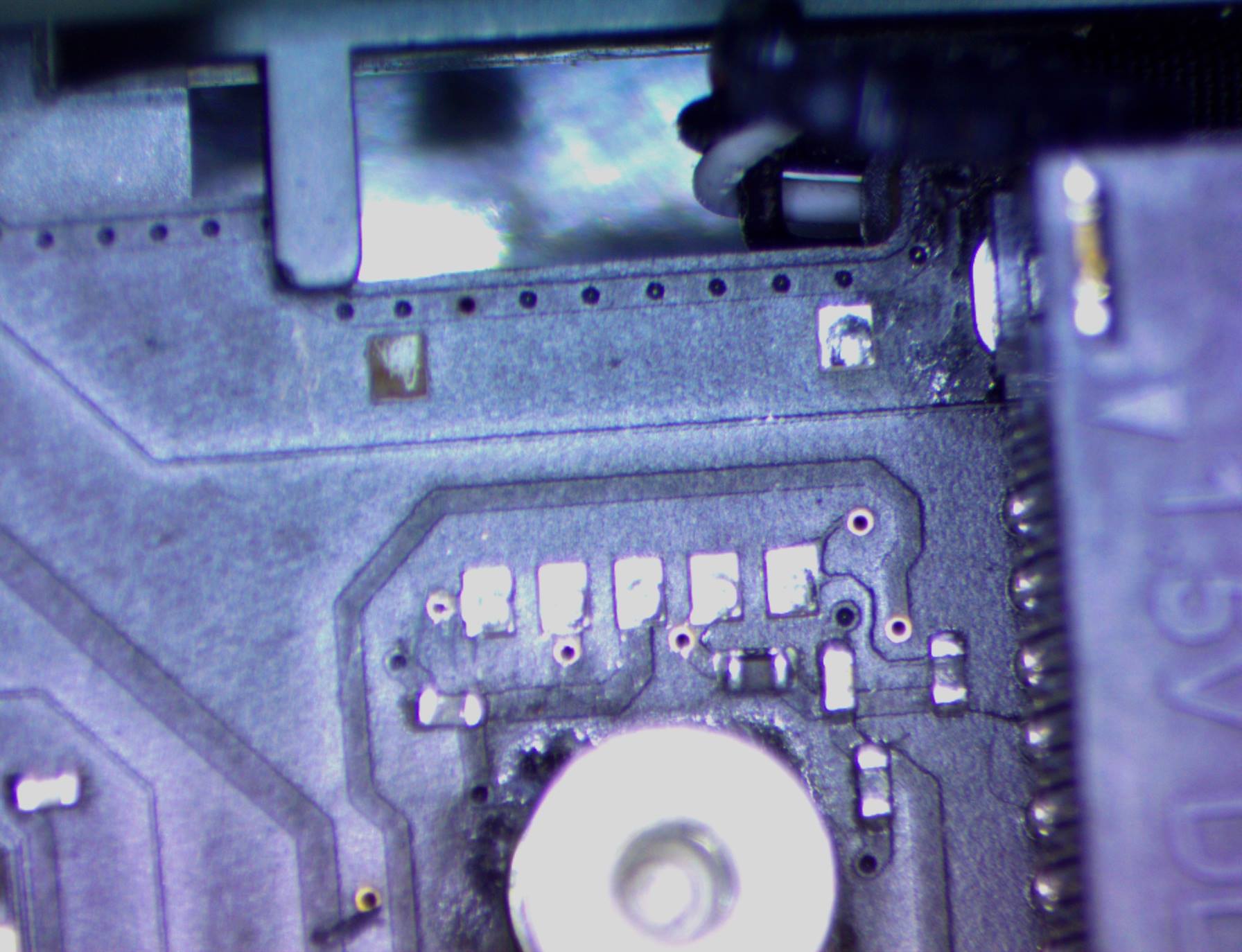 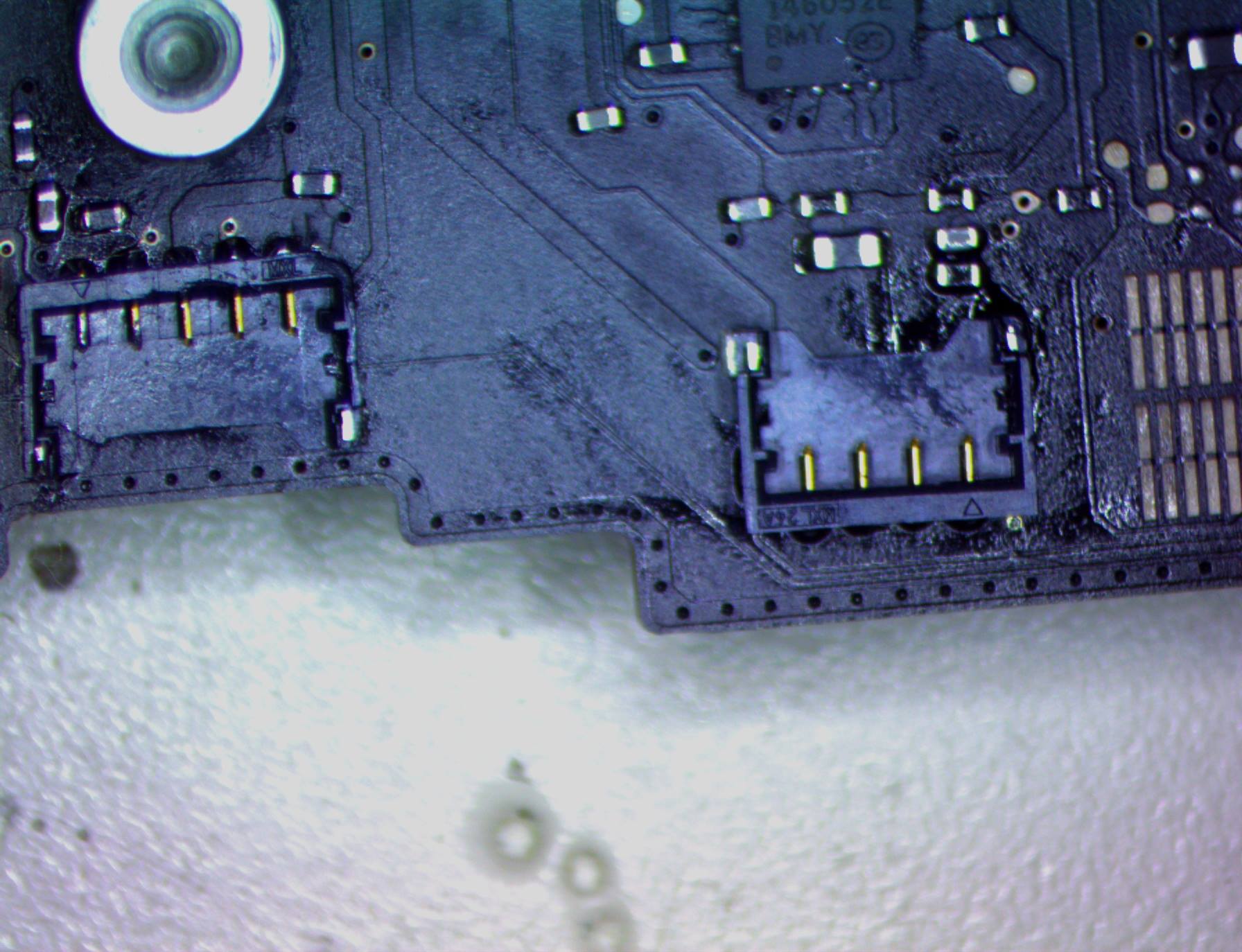 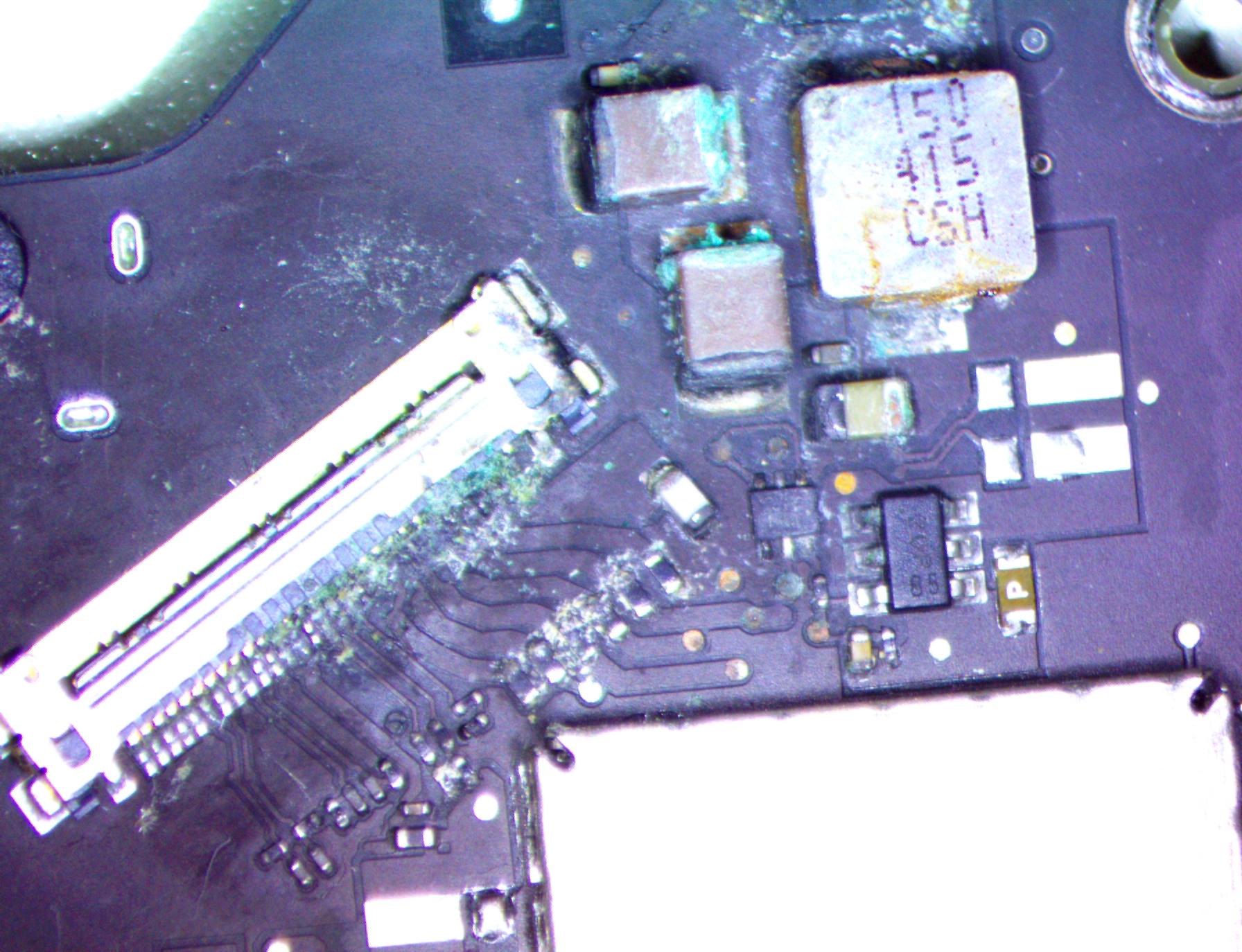 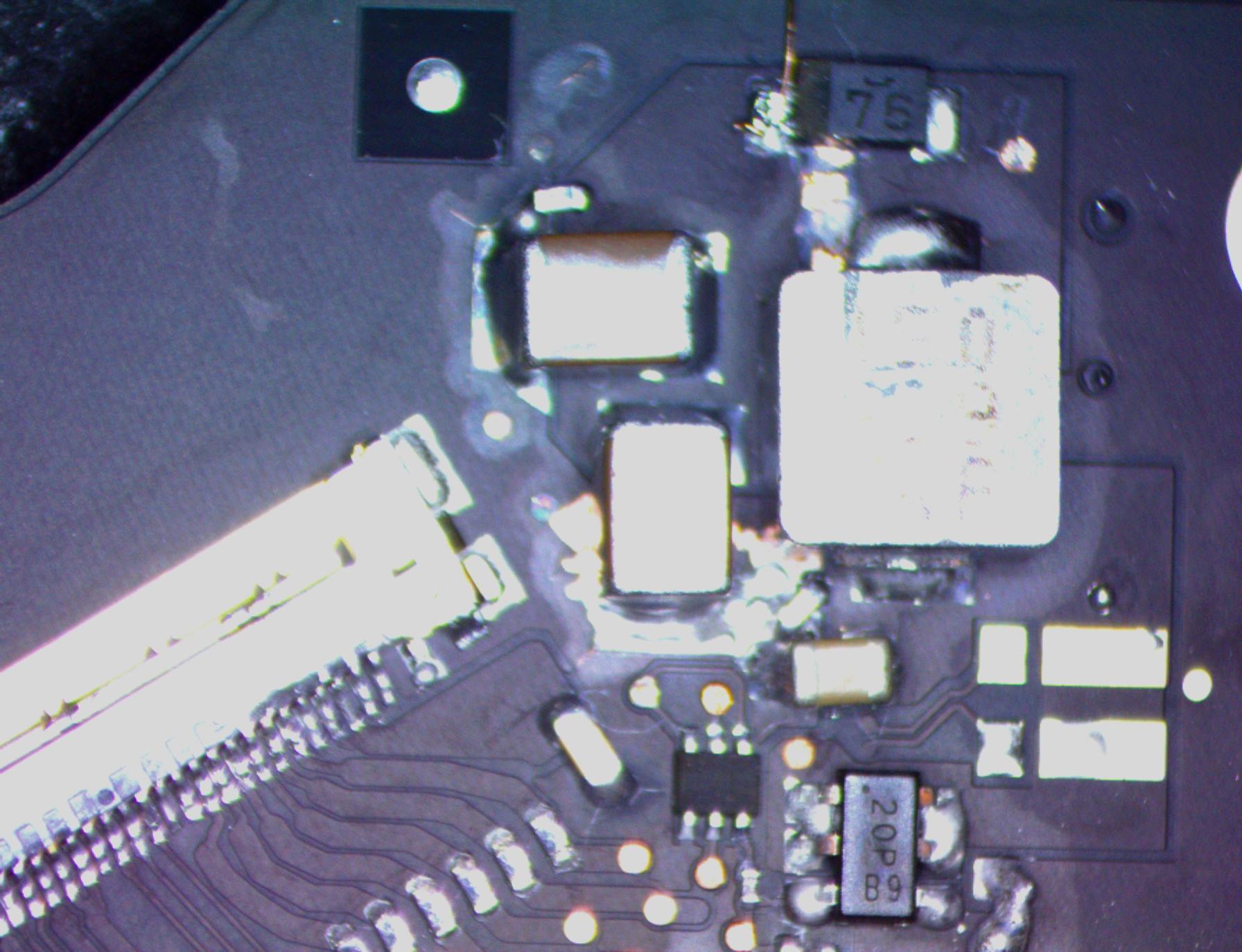 MacBook air with damaged traces from the LVDS solved with a jumper wire: 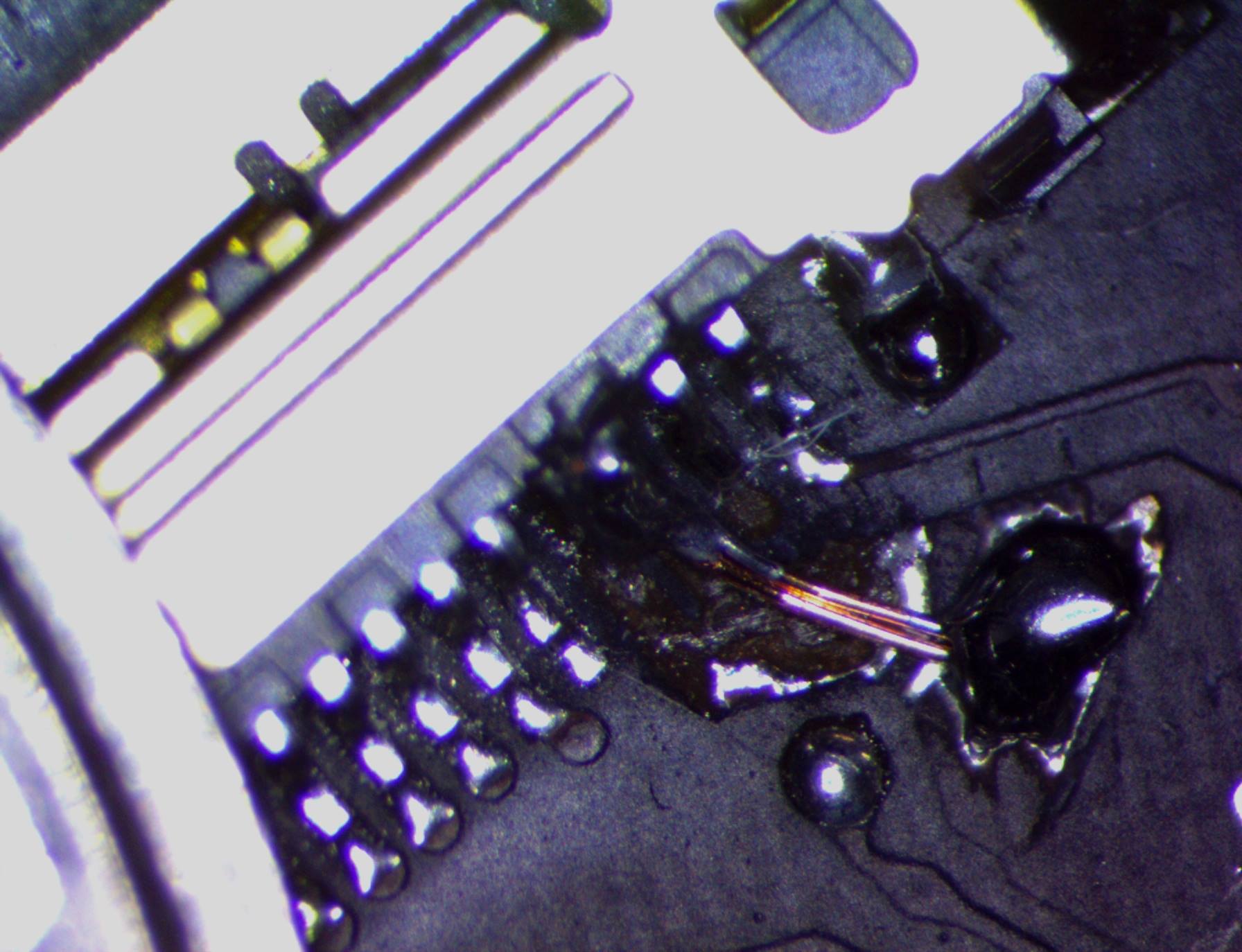 Our standard logic board repair service is £150 + vat. Details here.

Spilled liquid on your machine? – here are some immediate tips: